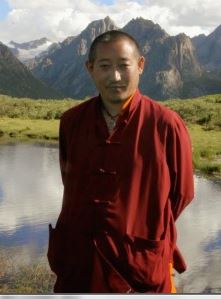 Lama Lakshey Zangpo Rinpoche was born near Nyenpo Yurtse, Golok, in the beginning of the summer in the wood tiger year (1974) to a Tibetan nomadic family. At the age of three, Lama Lakshey was first recognized as a Tulku (teacher that chooses to reincarnate in order to help sentient beings). At that time, Lama Lakshey’s family chose to keep him at home instead of sending him to monastic school as was the custom. As a result Lama lived with his family in a very organic way within a traditional black tent, tending yaks, horses, and sheep. Throughout this time, Lama Lakshey repeatedly expressed an interest in entering formal Buddhist teacher training. On one occasion he even pleaded with a visiting Lama (Buddhist teacher) to take him along with him in order that he might be able to enter a dharma training environment. During this period, Lama Lakshey received his main dharma education from local and visiting masters, and from his mother Samdrup Tso who is a wisdom Dakini in her own right. Samdrup Tso being the daughter of Terton Orgyen Katchod Lingpa (one of the thirteen great Lingpas in the Nyingma tradition).

Monastic Education & Blessings of the Masters

Lama Lakshey Zangpo’s formal dharma education began at the age of eleven when he entered Mardo Tashi Choling and began his training as a spiritual master in the Kathok Nyingma tradition. During his time at Mardo Tashi Choling, he received the complete Khatok lineage empowerments and transmissions known as Duddul and Longsel from Khatok Moktsa Rinpoche. At the age of fifteen, Lama Lakshey entered Larung Chokyi Drongkyer (Sertar Buddhist Academy), where he studied with the Lord of the Dharma, the Wish-Fulfilling Jewel Jigme Phuntsok Rinpoche, and many other sublime teachers. From him he received the empowerments of Nyingtik Yabzhi. Also during his fifteenth year, he received from Khenpo Shedrup the Five Volumes of Teaching which he then listened to, contemplated, memorized, and practiced. Especially, he received the ripening empowerments of the liberating oral teachings of Dzogpa Chenpo (Great Perfection) from Khenpo Jigme Phuntsok. He engaged in listening, contemplation and meditation for many years and received many empowerments and oral transmissions from Moktrul Rinpoche and other great learned masters including Khenchen Tsultrim Lodro, Khenchen Chimed Rigzin, Tulku Lungtok, Khenpo Sherab Zangpo, Khenpo Yeshe Phuntsok. Throughout his time there, Lama Lakshey listened and practiced these precious instructions in a vast and profound way.

At the age of twenty seven, Lama Lakshey set out on pilgrimage  and traveled to many holy sites in Kham, Amdo, U tsang, China, India, Nepal, and Thailand. He also practiced meditation in retreat in the caves of Longchen Rabjam and Guru Rinpoche at Samye Chimpu and Gangri Tokar. During this period of pilgrimage, he received teachings from many great scholars and practitioners within the Sakya, Geluk, Kagyu, Nyingma and Jonang traditions of Tibetan Buddhism. From Terton Lama Gerwang, Lama Lakshey received the complete cycle of Rinchen Terdzod empowerments and transmissions. At this same time Lama Lakshey was formally recognized by Terchen Lama Gerwang as the reincarnation of Tulku Pema Tashi, the son of the treasure revealer Terton Orgyen Kachyod Lingpa. Upon returning to Golok, Lama Lakshey encountered His Eminence Bontrul Tenpai Wangchuk who became his second Root Guru. From him Lama Lakshey received Nyen Gyud (snyan brgyud), The Whispered Lineage, a lineage of secret teachings transmitted only to the closest disciples through direct communication with their root teacher.

Journey to the West

In 2003, at the aspiration of Khentrul Kunzang Gyaltsen, Lama Lakshey undertook the position of Vice Principal at the Kumkar Sengdruk Taktse School in Golok where he taught for several years. Established by Khentrul Kunzang Gyaltsen the goal of this primary school is to educate orphans and impoverished children. Then, Khentrul Kunzang Gyaltsen, Tulku Thubten Norbu, and Lakshey Zangpo discussed with each other how to most benefit Tibetan people, especially the students of Sengdruk Taktse School, and they decided that coming to America to study would be very beneficial. So Kyabje Lingtrul Rinpoche kindly invited Lakshey Zangpo to come to America. Lama Lakshey arrived in America in September of 2007.

In 2009 Lama Lakshey moved to Spokane, WA and founded his dharma organization here in the West. From this time until today Lama has provided regular ongoing meditation instruction and teaching in the Tibetan Buddhist tradition. 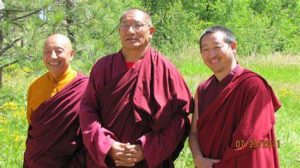 During this period, H.H. Katok Getse Rinpoche, the Fourth Head of the Nyingma tradition, came to the center to bestow blessings and to enthrone Lama Lakshey according to the Tibetan Buddhist tradition. In 2011, after three years of teaching and practice, Lama Lakshey officially founded Tsinta Mani Choling. At Lama Lakshey’s request, H.E. Tulku Tenzin Gyatso, the head of Larung Gar Institute, bestowed the blossoming dharma Center with the name of Tsinta Mani Choling (The Wish Fulfilling Jewel). The TMC name also corresponds directly with the sacred name of H.H. Jigme Phuntsok which is Yeshe Norbu. H.H. Katok Getse Rinpoche continued to visit several times between 2009 and 2015, further establishing TMC as a place of serious practice and instruction.

Lama has a modern approach to teaching meditation of individuals from a variety of backgrounds, teaching classics and sutra using traditional methods as well as meditation and mindfulness for those of all faiths. Lama Lakshey is especially interested in how to merge traditional culture together with modern thinking. Lama Lakshey actively teaches in Washington, California, Montana, Idaho, and Louisiana. Since 2020 Lama Lakshey has been teaching online continuing the Sunday teaching cycle that began in 2009. Also beginning in 2020, Lama Lakshey founded the Wednesday night series.